Why is my computer slow and how to fix it?

In this post, you will learn about why is your computer slow and how to fix it. Friends, slow running of laptop or computer is the problem of many people. But what is the actual reason behind this problem? We often do not know this. Many times we try a lot to speed up our computer or laptop. But many times even after doing everything, our laptop or computer lags and runs slow. 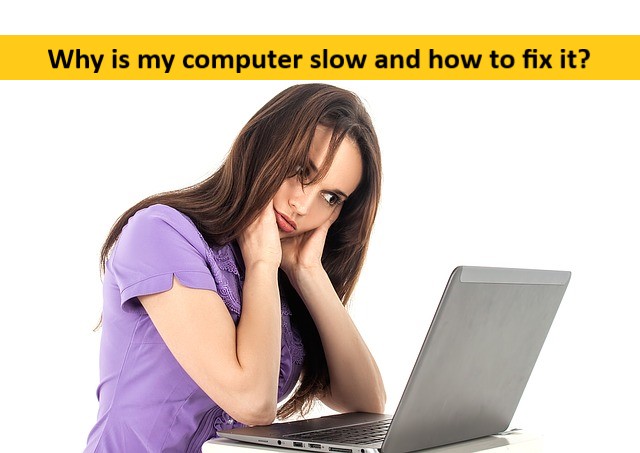 Many times you must have noticed that when we get a new laptop or PC, we either install new windows. So in the beginning the computer runs very fast. But gradually it slows down.

There can be many reasons behind this problem, some of which I am going to discuss with you guys today, believe me, if you read this post completely, then maybe you will get the solution to your problem. So let’s know which are the areas due to which your computer is running slowly.

1: By installing a very heavy antivirus program in the computer –

Why is your computer slow and how to fix it in the first region – You must think that this region is nonsense or everything is fake Yes, you are right in your place and your thinking is also right, that we use antivirus to avoid virus. But if the configuration of your computer is not good i.e. if you do not have 4 GB Ram, Integrated Graphic and SSD, you are using HDD. If you are using this normal configuration computer or laptop then definitely your system will run slower than using Antivirus.

There is no doubt that you use Antivirus to protect the computer and Antivirus does it less well but the more effective your Antivirus is, the stronger it is, the more heavy your computer or laptop. and it will be interfere in the work.

If the security is high, then every file will be checked and when the file is monitored so much, then the disk usage, memory usage increases, due to which your system starts slowing down due to less configuration in the computer.

That’s why we will tell you that if your system is of low configuration and you are also using Windows 10, then use the Default Antivirus of Windows which we know as “Windows Defender”, this Virus of your Computer or Laptop. Threat Protection is enough. If you need antivirus, consider upgrading your system. Put some RAM and SSD so that your system will not lag.

Why does Antivirus slow down the speed of the computer?

Why does Antivirus slow down the speed of the computer, you can understand this with one of my examples, if you have a situation in which you have to matting 500 people and you also have to take care of security, for which you are in front of your situation. 2 security guards have been seated, now what will happen, as people come and allow all the people to enter the hall only after checking the security guard, then it will happen that all the people will take more time to sit in the hall, now just think that If the Security Guard is removed, then all the people will sit quickly without any hindrance, due to which the process of coming and sitting will be faster.

Similarly, Antivirus also allows your computer to open every file only after scanning, which reduces the speed of your computer; it is a different matter that it does not show you all this but it happens.

Instead of Third Party Antivirus, you should use Windows Defender and update it from time to time so that the speed of your computer will remain fast.

2: Many programs are active while booting the computer –

The second reason in the list of why is my computer slow and how to fix it – Only after installing new windows, our first task would be to install all the software one after the other as soon as we install the software and use them. Keeps doing it too.

Most of the software that you install is installed at start-up or their purpose is to be set on start-up or it is that as soon as the computer or laptop is started, you should use that software first or if you are going to come less, then your use it. Do it first therefore, when you turn on your computer, you will get to see those software in front of you.

3: Removal of software that does not follow the procedure –

The third reason in the list of why is your computer slow and how to fix it – There are some software that do not follow the procedure properly. Procedure means that you have installed any software. Have used it and then changed your mind then you uninstalled that software.

When you are uninstalling any software, all its files should be removed from the computer. But some software manufacturers do not pay much attention to this process, due to which many files remain in your computer or laptop even after uninstalling the software and not even deleted.

When you uninstall any Program/Software, then immediately delete all its files from Local Disk C.

The solution to this problem is to go from place to place in the file manager and delete the files of the uninstalled software.

4: The Machine Generates Too Much “Garbage” Along the Way –

Why is my computer slow and how to fix it The fourth reason in the list – Friends, we use our computer or laptop a lot, but we do not keep in mind that whatever task we perform in the computer or laptop, it’s one of its own. Cache files keep getting created, then according to the time, our system keeps on slowing down, so it is sometimes very important to clear them. As soon as you clear them, your system will start running very fast, you should do this every 10 to 15 days.

Delete all Temporary File; you can delete it in this way.

Although many users are now using SSD, but there are still many users who use HDD. Disk Defragment for HDD is a very important utility that arranges the data present in the hard drive and when everything is arranged. It happens .

Read Also: Best Websites to Download Paid Software for free on your PC

The files that are in the hard drive can be well organized, so we use the Defragment process. If you do not defragment your system’s hard drive, it will slow down the system significantly.

6: Due to improper buffer memory –

When the computer or laptop’s RAM becomes completely busy, it gets filled with the task. Due to which Ram does not have the capacity to do any other task. Then Ram starts using the computer’s memory. Which is called virtual Ram.

Virtual memory sometimes depends on you how much you have set it. Sometimes the computer automatically sets it according to a fixed size. But sometimes that is not enough. Many times when you might have faced an error while running any software or game in which “Virtual Memory Too Low” is written.

This problem comes only when the size of virtual memory is very less and your RAM capacity remains in full swing. You must have seen this problem in most of the systems with 2 GB Ram or 4 GB Ram. In such a situation, if there is no virtual memory on the hard drive, then it has full load on Ram.

Due to which the system lags, because RAM is not able to process the tasks that remain in the system. Nor is there any virtual memory on which it can shift the task. To avoid this, you can create virtual memory and customize it.

HDD vs SSD: Difference between Hard Drive and Flash Storage

How to Fix Laptop Won’t Turning On or Charge

How to Upgrade Windows 10 to Windows 11

How to Change IP Address on iPhone

How To Make Money By Making YouTube Shorts Videos

What are the Sectors of Indian Economy

How to Stay Positive During Job Search

Why do we Forget? – Human Memory Power

How to Boost the Immunity System Against Coronavirus?