Storage is one of the main needs of computing and each technological development has brought with it a newer, faster and higher performance version of the same component in a smaller package. While there are many things that fit this description, we will limit our scope to HDD vs SSD. We’ll get into the finer details, but first, let’s get to the basics. 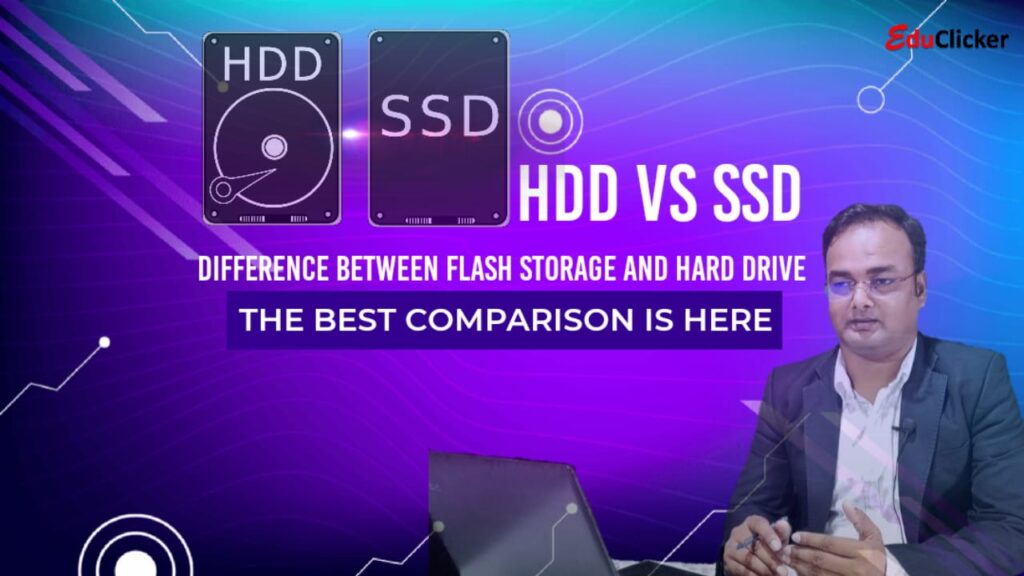 What is HDD and SSD?

Before answering that question, let’s look at some computer basics. So your computer/laptop is the dumbest thing ever. Unless you explicitly specify what it should do, it just sits using energy. Also, if you turn off the power supply, you will forget about anything you were doing or capturing. That’s where secondary storage devices come in. While RAM and processor registers are primarily used for computing and loading applications, secondary storage devices are used to retain data or to store data in simple terms.

Now, with the ever-increasing changes in technology, many options have come and gone in this data storage space. We started with floppies, then optical drives, then hard drives, and then faster flash storage options, to name a few. And then obviously you have the good old memory cards and USB sticks that go into flash storage.

At first, the cost per gigabyte of hard drives was very high, but as the technology became more common and accessible, prices fell. This aspect is valid for almost everything in technology, be it your smartphone, LED panels and everything else imaginable. Early adopters typically pay a higher price to use the new technology, and then the price slowly drops.

When looking for storage space, there are a few important things to consider. And judging by the title of this post, I’m sure everyone must have made a biased decision that it’s the SSD that wins. I tell you, wait to be surprised. So what exactly are the areas you need to compare flash storage to hard drive to make a purchase decision?

And these are the ones we will compare the two. “HDD vs SSD”.

Let’s talk about what exactly HDD and SSD mean.

What does hard drive mean? Hard disk drives or HDDs store data on a magnetic core (disk) and that core is divided into tracks and sectors, which are mostly nasty things you can read yourself. The idea is that a single entity is divided into smaller units where the data is stored. And there is a rotating head that detects each small drive and writes the original.

SSDs, or solid-state drives, on the other hand, have no moving parts and are based on flash storage technology that makes them inherently faster than hard drives made the last call. Rather than being made of a magnetic core, SSDs rely on semiconductor chips to store data. They’re like your RAM (which is faster than your secondary storage device), but they have the added advantage of not losing your data when there’s no power supply. SSDs look like RAM with a grid of electrical cells to facilitate fast data transactions.

Now that we have the basic premise established, let’s move on to the comparison.

There are a few things you really need to keep in mind when considering the speed of both options. First of all, yes, SSDs are faster, but that’s for reading. In real world scenario, when you buy SSD, it is faster for both read and write, but it will degrade over time. This is because, out of the box, SSDs have blank pages that you can write to, but their write operations take longer, it takes much longer due to the work of finding usable memory blocks writing on it. When it comes to reading, it outperforms hard drives by staggering numbers. This is because SSDs naturally have an advantage over HDDs because they are made of faster flash storage that can send and receive data quickly.

When it comes to performance, you need to take a closer look. SSDs are all about small data transactions that happen constantly all the time. That you must be running an operating system where you get your emails or have to launch an application etc. These are things that depend on the responsiveness of the system and this is where the SSD destroys the hard drive. Any modern SSD will be faster than the fastest hard drive available on the market.

But what about performance regarding storage?

Well, it’s true that you don’t really need a fast storage option to play videos, watch movies, view your photo collection, and HDDs beat SSDs when you factor in price (which we’ll get to later in this post). You will see that we are nowhere near replacing hard drives with mass storage solutions.

This is an interesting point to see. As of now, for $160 USD you can get a 256GB SSD or a 4TB HDD. That’s a 16x storage space factor. That’s what you have to keep in mind. So basically, by buying 2 hard drives, you can set up a RAID with a single backup drive without shelling out an extra dime. As mentioned above, SSDs are fairly new to the game and it will take a while for prices to rise, but in most cases, you want to go for a hybrid drive. A hybrid drive essentially harnesses the technology of both an SSD and a hard drive. So you get the massive storage size of a hard drive for storage and the speed and performance of an SSD to run your operating system.

Read Also: Characteristics of Computer – Features of a Computer

There is really no clear winner in the difference between HDD and SSD. Both solutions work in their relevant scenarios. While HDDs should be chosen in cases where reliability is paramount, in cases where performance is an everyday necessity. Such as a laptop (space-constrained due to slim designs these days), SSDs. They are very important. So take your opinion well before investing.

Why Do People Still Misunderstand VPN?

How to Join Zoom Meeting for the First Time

How to Use Green Screen for Streaming

How to Increase Mobile Hotspot Speed on Android

How to Fix Laptop Won’t Turning On or Charge

What is optometry and how to make a career in it?

How to Apply for Passport Online – Passport Apply Kaise Kare

What is the project quality plan?

How to Record WhatsApp Calls on your Smartphone

What is Industrial Safety Management and what are the employment possibilities?