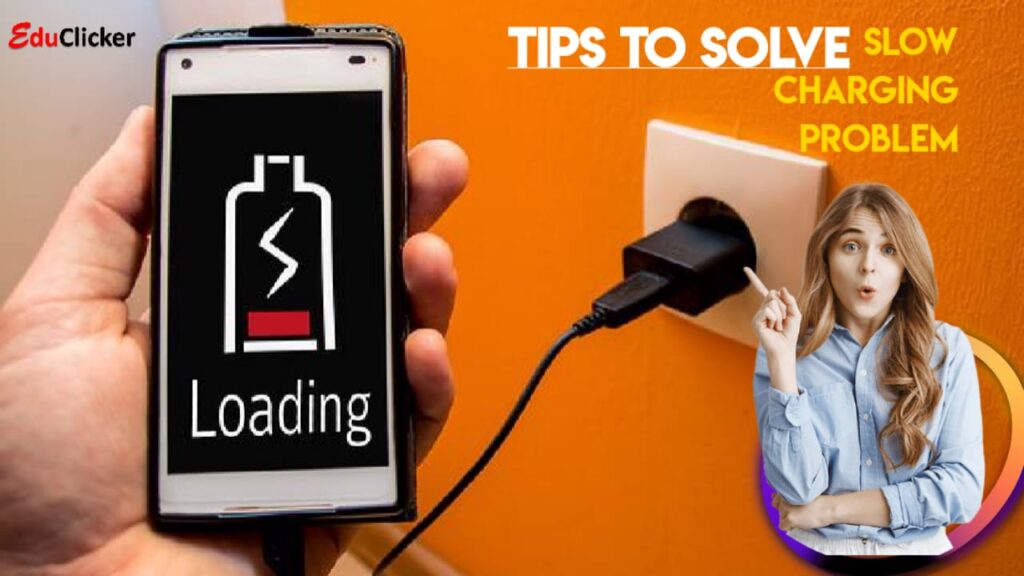 Many people complain that their Android phone is not charging fast. In the past, it used to charge very quickly. Whereas as the phone got old, it started taking a lot of time to charge.

Not only this, many new Android phone users also have this complaint that despite the phone being new, it is charging slow. Next we have talked about 14 reasons and solutions for this problem in Android smartphones.

We buy a smartphone of any brand after seeing better looks and new features. But don’t pay attention to his accessories. The accessories provided with the phone are of very low quality.

Due to this, the phone’s USB cable or power adapter does not connect with the phone properly and the phone does not pick up the charge properly. This is the biggest reason for the slow charging problem in most new phones. So try changing the USB.

On the other hand, if the phone is old, then its USB slot may be bad. In such a situation, try connecting your charger with another phone, if the charger is working properly, then understand that there is a problem with the USB.

Often people take a new phone but use the old power adapter for charging it. The new charger is lying in the box itself. But be aware that the old charger will only charge your phone slowly. Because the battery in the old phone was very low power and hence there was a charger of less ampere.

At the same time, the power of the battery in new phones has increased a lot compared to before and companies now use new technology chargers. In such a situation, try to charge the phone with a new charger only.

Dust is a very big reason for slow charging or not picking up the charge in the phone. Many such complaints have been heard. Recently, a new phone got a complaint about not charging on the very first day and the engineer just blew it and put it in charge and the phone started working fine.

Therefore, in new or old phones, if you ever feel that your phone is charging slowly or not, then first of all clean the USB slot and cable of the phone with a brush or with a little strong air. This may solve your problem.

As mentioned earlier, many companies do not give the right quality of accessories with the phone. In such a situation, as the cable gets older, more problems start coming in it. With the old cable, the layer of metal is also removed.

In the Apple iPhone, the company has used the Lightning cable which is better than the normal USB. In such a situation, if the phone is old, then try using the cable of another phone in your phone. This will solve your problem.

Repeated use of the plug-in adapter has seen many times that the adapter has problems or is not set up correctly in the plug with which you are using the adapter. In this case, once you check your USB with another adapter. If the battery is charging properly then you change your adapter, the problem will be resolved.

Sometimes the complaint of slow charge in the phone is also due to the software. In such a situation, companies give a solution to this problem through new updates. If all the above methods do not solve the problem of slow charging in the phone, then once you check the software update and if a new update has arrived, then update it immediately.

Read Also: How to Recover Android Data After Factory Reset?

If the battery of the phone has become too old, then the problem of slow charging can also be caused by this. If none of the above solutions is solving this problem, then you know that it is time to change the battery.

Read Also: How to Fix Your Slow Phone – 11 Best Tips to Make Your Android Phone Faster

You can also use battery calibration once before you replace the battery. To calibrate the battery, you must first fully discharge it. Then he has to turn off the phone and charge it 100%.

A major reason for slow charging can be a low power source. The phone charges slowly even with low power power banks and low power chargers. On the other hand, if you are charging from a computer and have an old USB (USB 2.0) then the phone will charge slowly.

In such a situation, do not consider it a fault of the phone, first check it with how many volts the alternate charger you are charging the phone with and the actual charger supplied with the phone supplies how many volts.

Sometimes some applications or games consume a huge amount of battery even after being turned off. Even in this case, the battery of the phone charges very slowly. You can locate these applications with the help of some battery apps.

Uninstall the application as soon as it is detected or if the update comes, update it. This will solve the problem.

If your phone is charging so slowly that the hardware itself is responsible for this, then it is not necessary. Charging can also be slow due to a fault in the phone’s software. In such a situation.

If you have recently installed a new app, then delete it immediately because it may also happen that this app is drawing more power in the background. If the problem still persists/continues then you need to reset the phone.

Many apps consume huge amounts of battery. Apart from this, the battery of the phone charges slowly. If you want, you can use apps like 360 Security or other apps to detect battery consuming apps and uninstall high consumption apps.

If your phone is charging slowly then it is time to replace this battery. Especially, when the problem of slow charging of the phone is not resolved despite all the above mentioned problems.

So friends, I hope that you like this articles related to “Why Is My Phone Charging So Slow? 14 Reasons and Solutions”. If you have any suggestion or question in your mind don’t hesitate to comments on the comments box given below.

Why Virus Comes in Mobile and How to Avoid it.

Which is Best Smartphone Company in India

How to Connect Mobile to TV via USB, WiFi, HDMI, Bluetooth, Anycast

What is a bitcoin and how does it work? How to buy bitcoin wallet

What is optometry and how to make a career in it?

FAUG GAME – How to download FAUG on Android device

What is an RSS feed and how does it work?

How to make money from LinkedIn?

How to Become a Radiologist and What are the Employment Possibilities?

Techniques of Learning- How to learn